Two films/audio are produced for ArkDes. Displayed from October 1st 2021 to August 28th 2022 included in the main exhibition: Sigurd Lewerentz: Architect of Death and Life.

The ”Entrancefilm” will be displayed in the entrance of the exhibition and the soundinstallation ”Architect Bernt Nyberg in discussion with Sigurd Lewerentz” will be in the last room of the exhebition. 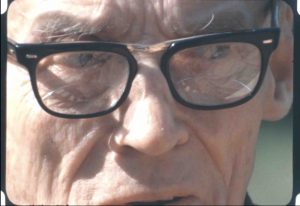 Sigurd Lewerentz (1885–1975) is one of architectural history’s most revered, and most mythologised architects. ’Sigurd Lewerentz: Architect of Death and Life’ will be the first ever comprehensive exhibition of the life and work of the Swedish architect, drawing on ArkDes’ unique and complete collection of his drawings, personal archive and library. It is a once-in-a-lifetime opportunity to see the complete works of an architect who is perhaps even more influential today than he was in his own time.